Professor tells SvD, “It’s unnecessary to test everyone who wants to be tested” 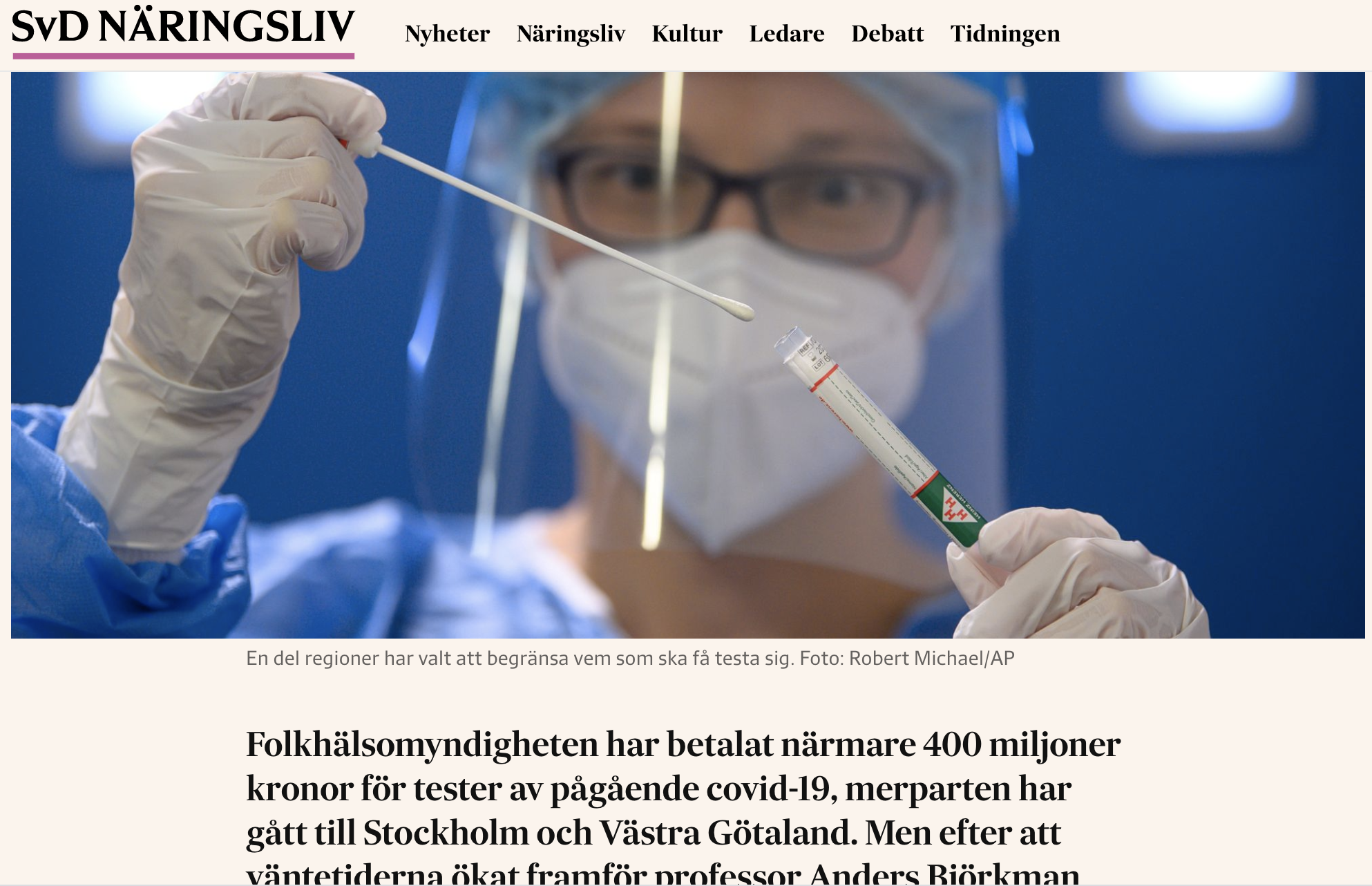 SvD has reported on increased waiting times in Stockholm and Skåne – which can run the risk of missing cases. According to the Karolinska University Hospital, responsible for coordinating testing in the Stockholm region, those who order a testing kit may have to wait five days. And for drive-in units, waiting times can total four to seven days

– The highest probability of getting accurate testing results are seen in the first week of sickness. And the recommendation is taking the test before day four or five.

Other regions have decided to limit who can take a test. Control questions greet those living in Gävle, logging in to 1177.se to schedule an appointment. If you don’t have any relevant symptoms to COVID-19, like coughing or fever, you’re informed that you’re not allowed testing. The same is true if you’ve had symptoms for less than 48 hours.

– We manage sample taking from a socio-economic standpoint to reduce the regular care pressure, says Simon Nilsson, the Development Manager in Region Gävleborg.

According to the company Platform24, a subsidiary to the online doctor Doktor24, who runs the IT-platform for the region’s testing, around 22 percent of unnecessary testing are screened out in the process. This equals 9000 individuals in the area. Folkhälsomyndigheten reimburses regions with 750 SEK per test, which means that Gävleborg alone has saved 6,8 million SEK to screen out what is deemed as unnecessary tests.

Simon Nilsson doesn’t want to speculate on how many of these tests have been unnecessary. Still, he states that it’s reasonable to believe that regions will have some over-testing, without filtering who is eligible for testing.

Do you think there’s a risk that society spends an unnecessary amount of money on testing if you let anyone test themselves?

Simon Nilsson is supported by Anders Björkman, professor at Biomedicum at Karolinska Institutet in Solna.

– It’s doubtful to test everyone who, by varying reasons, wants to be tested. If one has symptoms of some kind that are consistent with a COVID-19 infection, it’s critical to test yourself. And it must happen fast, easily, and effectively, says Anders Björkman.

– But if one has just come into contact with another infected person, the value of testing is doubtful. The test results can then be negative and change to positive just a few days later. In these cases, quarantine is more critical. When the government pays for testing, it should be in value for society, to help fight the epidemic.

The ones responsible for Västra Götaland’s region disagree that the extra tests could be an unnecessary cost.

– We try to test anyone who shows symptoms. Our priority is to slow the spread of infection, says Kristine Rygge, Chief Physician and Medical Advisor in the Västra Götaland region.

Why isn’t it enough to test a smaller group, where you can see a real need for testing?

– Right now, we’re in the middle of a pandemic. Common cold symptoms can be COVID-19. Because it’s an illness that we contact trace, we must find as many infected as possible to protect risk groups and slow the spread of infection.

Not even the growing queues have made the region consider rationing the tests.

– We’re prioritizing that as many as possible should get the opportunity for testing because we need to slow the spread of infection. Longer response times are possible, but in most cases, you get an answer within three days, says Kristine Rygge.

Region Stockholm reasons in the same way. They state that it’s still possible to get a testing kit delivered home within 24 hours.

“The current widespread testing shows that Region Stockholm who has been hit hard by the pandemic, can follow the development of number of cases, which is crucial. Smittskydd Stockholm can contact trace each individual case and help slow the rate of spread,” says Maria Rotzén Östlund, Assistant Infection Control Doctor at Smittskydd Stockholm, in an email to SvD.

Region Stockholm asks everyone who wants to get a test to answer a series of questions about how they’re feeling through an app, but when SvD tests the app, you can order a test no matter what your answers are.

Kristine Rygge says that the region continuously reconsiders its strategy. If there would be a very high demand from individuals with common cold symptoms, all tests can be reconsidered.

– If we see a waiting time upwards a week, we have to rethink.

In 2020, Stanford Medicine postulated the Rise of the Data-Driven Physicians in a global health trend report. Indeed, they are on the rise.

Industry magazine “Digital Hälsa” writes about the early results of our digital corona clinic: "Platform24 has analyzed data from the first few weeks of using the solution to triage patients experiencing corona symptoms in Norrbotten, Gävleborg and Jämtland Härjedalen.

Region after region is now rapidly launching a “central digital entrance”, where the possibility of a “digital corona clinic” is particularly relevant. There is a very intense work period at Platform24 and in just a few days, a region can have an automated guide to digital care, including the” digital corona clinic”, in place.

This website uses cookies to improve your experience while you navigate through the website. Out of these cookies, the cookies that are categorized as necessary are stored on your browser as they are essential for the working of basic functionalities of the website. We also use third-party cookies that help us analyze and understand how you use this website. These cookies will be stored in your browser only with your consent. You also have the option to opt-out of these cookies. But opting out of some of these cookies may have an effect on your browsing experience.
Necessary Always Enabled
Necessary cookies are absolutely essential for the website to function properly. These cookies ensure basic functionalities and security features of the website, anonymously.
Functional
Functional cookies help to perform certain functionalities like sharing the content of the website on social media platforms, collect feedbacks, and other third-party features.
Performance
Performance cookies are used to understand and analyze the key performance indexes of the website which helps in delivering a better user experience for the visitors.
Analytics
Analytical cookies are used to understand how visitors interact with the website. These cookies help provide information on metrics the number of visitors, bounce rate, traffic source, etc.
Advertisement
Advertisement cookies are used to provide visitors with relevant ads and marketing campaigns. These cookies track visitors across websites and collect information to provide customized ads.
Others
Other uncategorized cookies are those that are being analyzed and have not been classified into a category as yet.
Save & Accept